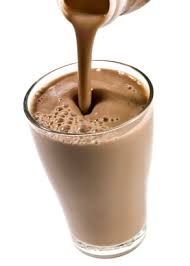 Every now and then there is something in the news that really gets me going! Right now it is chocolate milk.

Because the dairy lobby is pushing the FDA to approve the use of the artificial sweetener aspartame in chocolate milk. Sugar isn’t bad enough now they want to add excitotoxins to dairy products on the down low.

Terrific idea – take milk which has many harmful side-effects and up the ante by adding excitotoxins! And this is how my tax dollars are being spent. . . We were traveling and eating in restaurants. Every day, feeding myself was a challenge! The first hurdle was finding anything vaguely vegetarian on the menu.  If I found something besides salad I still had to be very careful.  Lots of added bacon (salad dressing, baked potatoes, even mac and cheese) and foods cooked in lard. Asking the server about the ingredients was a whole other problem. Mostly the people who served me and the people I ate with couldn’t get over the fact that I didn’t eat any meat. END_OF_DOCUMENT_TOKEN_TO_BE_REPLACED

Four years ago David developed a gluten allergy. That began a series of radical changes in our diet. But there were more to come!

Two years ago he started having a series of “weird” problems.  He was not diabetic or even pre-diabetic but he clearly had a blood sugar problem!  On any given day his blood sugar spiked and dropped for no apparent reason.  He was alternatively shaky and moody. And eating seemed to make the problem worse.

We were at our wits end!  So in an effort to figure out what was going on we started tracking the symptoms and what he ate. The place to start was in the grocery store; reading labels. END_OF_DOCUMENT_TOKEN_TO_BE_REPLACED