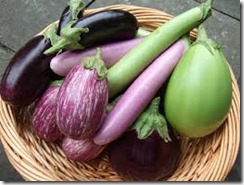 Summer in New Orleans means eggplant and lots of it! The abundance of it, particularly coming out of garden has forced me to find creative ways to serve it.

Don’t get me wrong, I like eggplant. I use it in various Asian dishes, grilled (used as a sandwich filling), in salads and still I have more eggplant.

Last summer, I found myself with 14 eggplant there were going to go bad if I didn’t use them pronto!  I decided to make a flexible eggplant dish; one that could be used as an appetizer (caponata), over pasta or spaghetti squash, as sandwich filling or just a hot satisfying side dish. I made a huge batch and froze about three quarters of it.

Two weeks later I had so much eggplant I had to do it all over again. Since no one wants to peel 14 eggplant I took a chance and just wash them and cut them up, leaving the peel in place. The batch actually turned out a little better with the peels on, firmer and more defined. So, the good news is you don’t have to peel the eggplant.

Here is a “smaller” version of the the recipe suited for 1 large or 2 small eggplant and not 14 at a shot!

Serve over pasta or rice, with French bread or refrigerate and use as an appetizer (best served at room temperature). This survives well in the freezer and is an quick and easy appetizer or snack.