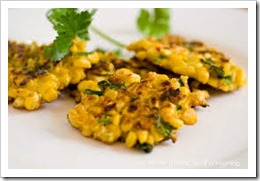 We ended up with a lot of extra food after the Fourth.  That is extra corn and potato salad.

I used the potato salad in a mock-nicoise salad. Made a big green salad – lettuce, green onion, celery and tomatoes. Next I added garbanzo beans (chick peas) instead of the tuna and a scoop of the left over potato salad instead of the traditional eggs and potatoes. I prefer asparagus to green beans, but either one works well. As for anchovies? Forget about it!

The corn was another matter. I used to make corn fritters. When we gave up eggs and cheese during our vegan year, they just disappeared from our diet. And evidently from my collection of recipes. Since we are eating a few eggs a week, I decided to try to approximate what I used to make. END_OF_DOCUMENT_TOKEN_TO_BE_REPLACED

We are packing away. It is amazing how much junk you can accumulate in a couple of years. The hardest part is making decisions – what to do about those little but useful items. For example all the special use kitchen items, the myriad little items hidden away in cabinets and drawers or the box of hooks, picture hangers and rug grippers. None of them are particularly expensive or irreplaceable. It just cost money and time to replace them. To keep or not to keep? My rule of thumb is that if I haven’t used it since we moved here 2 years ago, out it goes either for a yard sale or donation. But there are still a lot of “iffy” items. This part drives me nuts!! Which means all I want to do is eat! 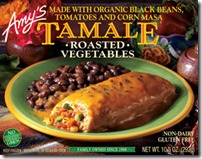 That is the long way of saying that we are either too busy or too tired to think much about cooking. Terrible, when you a chronically hungry (something called stress eating). Interestingly, this time out, I am finding it important to not eat junk. So, last Thursday we took a little trip to the local health food store to see if we could find something prepared that would work. END_OF_DOCUMENT_TOKEN_TO_BE_REPLACED 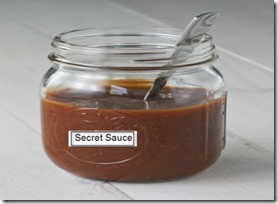 My personal challenge is finding new ways to make beans and rice interesting. At least once a month I stand in front of the fridge and see left over beans and rice. What to do? I have always thought that what I need is a secret sauce – one that is simple to make and adds tons of flavor.

Over the last couple of years I have tried lot of things. But I think I have finally arrived at one that really works to make a tasty all purpose casserole. 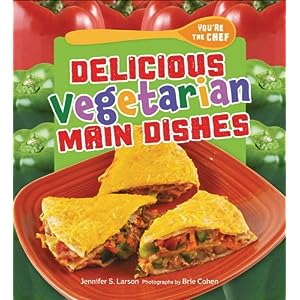 I’m not sure when I begin to cook. I know I was young’; probably 7 or 8. My one childhood cooking memory is making brownies follow the recipe in the Betty Crocker’s Cookbook for Boys and Girls.

When I was 8 (maybe 9) my Grandma sent me a cookbook for Christmas. I couldn’t wait to try it out. The first recipe I tried was for brownies. Trust me, I have never tasted a better brownie before or since!

That cookbook was the first in a collection of cookbooks that I  either don’t have or rarely even look at any more. These days I do Google search when I want to figure out what to cook. My current collection has 10 cookbooks I can’t bear to part with.  Betty Crocker’s Cookbook for Boys and Girls is one of them.

After all the food in New Orleans I was ready for some “plain” food. The simple food of my childhood. . .

I scrounged around the kitchen and came up with lentils and rice and I was in business! It took about 10 minutes to assemble the loaf and 60 minutes to bake it. I threw a couple of potatoes in the oven with it. When it was time to eat I steamed some broccoli and made a quick salad.

Funny how something so simple tastes so good! 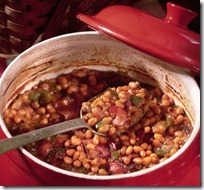 Our long warm fall has turned into a long (or so it seems) cold winter. Not a lot of rain, snow or cloudy skies, but still very cold. At least for me!

After holiday excesses we spent most of last week juicing and drinking smoothies to try and detox a little. After a week of that I was really ready for some bulky, tasty and very hot food. Baked beans seemed like just the thing. Threw a batch together and stuck them in the oven. END_OF_DOCUMENT_TOKEN_TO_BE_REPLACED

After the salsa making extravaganza there were still a bunch of peppers left over. We had Anaheim’s, Banana, Racoco and Jalapenos just sitting here. I stood in the kitchen contemplating alternatives. I knew I wanted to use them while they were still fresh, but how?

The obvious place to start was sautéing everything. Sautéed peppers and onions make a great side dish, but then what?? I stood in front of the pantry hoping for inspiration. And then it happened – my eyes landed on a can of garbanzos. END_OF_DOCUMENT_TOKEN_TO_BE_REPLACED

This is particularly apropos since we are traveling. No matter how you cut it, eating is a very social thing!  Fortunately we are staying with our daughter Meggan’s house so we are able to cook. But there are times when you just want to go out – especially when you are in a city like New Orleans. Although I have to confess that most of the raving about New Orleans food is pretty much wasted on me. Growing up, I was an easy kid to feed. I’d pretty much eat anything. There were only 3 foods I objected to – green peas, lima beans and dried powdered milk. So it follows that I really disliked succotash which my Mom considered a special treat. I wondered (and continue to wonder) why anyone would ruin good corn with lima beans.

Every now and then I have to go through the fridge and try to think of inventive ways to use the food. One day I made a mixture of corn, black beans, onion, green pepper and tomatoes. To my great consternation, David called it succotash. That started a heated discussion (argument) about the definition of Succotash. As much as it pains me to admit it, turns out David was right. END_OF_DOCUMENT_TOKEN_TO_BE_REPLACED

I hate picky eaters.  The ones who know they are going to hate something before they even taste it.  Probably because I could become one.I have the genetics for it! Plus.I have lots of opinions about food and what will work/not work.

When I came across several recipes for eggless omelets and eggless quiche my inner skeptic reared her ugly head.  I was pretty sure this was one of those ideas that wouldn’t work.  But, in the spirit of doing the opposite action, I pulled a quiche recipe and hung it on my fridge. END_OF_DOCUMENT_TOKEN_TO_BE_REPLACED