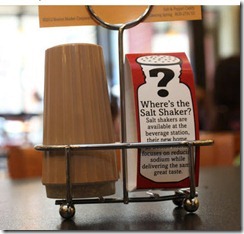 One of my greatest morning pleasures used to be reading the New York Times online. In our present political silly season. . . not so much! But every now and then, there is a piece that tickles my funny bone. The latest one was in the science section and called Some Restaurants Reduce Salt but Critics Call Moves Unnecessary.

The piece reported on the new table top salt shaker holders – see picture.  In an effort to cut down on the unhealthy effects of sodium the company has replaced salt shakes with these little signs.  If you have trouble reading it it says: END_OF_DOCUMENT_TOKEN_TO_BE_REPLACED We were traveling and eating in restaurants. Every day, feeding myself was a challenge! The first hurdle was finding anything vaguely vegetarian on the menu.  If I found something besides salad I still had to be very careful.  Lots of added bacon (salad dressing, baked potatoes, even mac and cheese) and foods cooked in lard. Asking the server about the ingredients was a whole other problem. Mostly the people who served me and the people I ate with couldn’t get over the fact that I didn’t eat any meat. END_OF_DOCUMENT_TOKEN_TO_BE_REPLACED