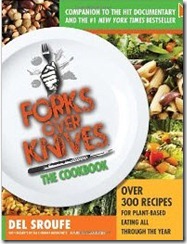 The new Forks Over Knives Cookbook arrived last week. The author Del Sroufe, is the man behind meals shown in the Forks Over Knives film.  The book is actually a collaboration between Sroufe and well-known Plant-Based chefs: Julieanna Hever, Judy Micklewright, Isa Chandra Moskowitz, and Darshana Thacker.

With 300 recipes to choose from, it is a good solid introductory collection of  vegan, low-fat cooking techniques and recipes. An added bonus is that many of the recipes are also gluten-free.

The book starts with a 21 page introduction section; filled with wonderful and helpful information. There are sections on things like prepping food, tips for saving time, a list of pantry items and another list of cooking tools. When you get to the recipes they are mostly simple; not a lot of complex steps. This indicates (to me) that they will probably not be terribly time-consuming. And the couple I tried were actually good — especially the mac and cheese.  OK, you know me, it was good but I have several ideas about how to tweak the ingredients so that it is more tasty yet.

One of my chief complaints about most  vegan cookbooks is that they call for “weird” foods:  special ethnic foods with names I don’t recognize or even harder to find condiments.  While this book has a few (cardamom pods and saffron threads) most of the recipes use very common ingredients that you can find at your local grocery store. And  as a rule of thumb common ingredients generally translate to more affordable meals.

The food photos are beautiful; unfortunately they are clumped together in four sections of four pages each. Nowhere near the recipe never mind next to it. Photos are expensive and I am not commenting on the scarcity of them as much as on the placement. The other thing that I would like to see is some nutritional facts on each recipe. Even a simple calorie count would be really nice!

There is a lot of reliance on nutritional yeast which I can do with out. And the biggest turn-off was the amount of soy used in the recipes. I find it so weird that plant-based recipe writers are seemingly not aware of the problems with soy in the US!

Overall the book has a “rushed” feeling. The recipes seem borrowed or reworked from the original Gene Stone cookbook and the Happy Herbivore.  The feeling was firmly cemented by the fact that the book shipped a week earlier than promised. Exciting until I really studied the recipes. . .I found several major errors! The publisher has acknowledge 30 of them and has produced an erata sheet that is easily printed and inserted into the book. But still!

I would love to whole-heartedly recommend this book; I can’t. It is a nice, serviceable, broad-brush approach to plant-based eating. A 3 on a scale of 1-5.

If I had to do over again I would probably save the money and check out the recipe section of the Forks Over Knives site and The Happy Herbivore site.