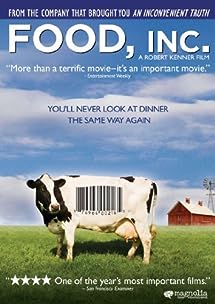 I re-watched Food, Inc last night and was struck again with how incredibly emotionally difficult this documentary to watch. I am not sure what I found most compelling, thought-provoking and/or upsetting:

I am by nature and training an activist so the end of the film was encouraging since there are things we can do:

Finally, I find it incredibly sad that something as intimate as food has become so abstract to us as a culture and that our humanity is being sacrificed on the alter of efficiency and cheapness!