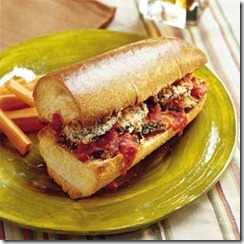 My friend Beth gave me an assignment – create a vegan (non-dairy), gluten-free, fat-free (or close too it), additive-free Eggplant Parmesan to use in Sandwiches.

You know how I am, can’t resist a challenge. So I started experimenting. Many of the recipe components can be found on the Basic Recipes Pages: Tapioca Eggs, Cashew Cheese and Quick Italian Red Sauce. Please refer to that page for the specific recipe otherwise this post is going to be way to long.

After all of this you will be spending a fair amount of time cleaning up the kitchen unless you are a much neater cook than I.  In fairness, however, I have to tell you that  David says most people are neater cooks than I . He knows since he is the one who most often cleans up after me.  The real thing I got was that  next time I will prep the eggplant (step 1) the day before and have that part done and cleaned up before I start with the cashew cheese and sauce.

This is a lot like making Lasagna only instead of using noodles for the layers you use eggplant. It’s just a lot more involved because of all eggplant prep time. By the time I put it in the oven, I was seriously wondering if it was worth all the effort.  It way violates my “30 minutes in the kitchen tops” rule.

One taste, however convinced me it was probably worth it! It was yummy hot out of the oven.  Two days later when I put it in sandwiches it was almost beyond belief.

As long as I was experimenting anyway, we tried  treating our big heirloom zucchini the same as the eggplant. Didn’t soak it, but did egg, bread and bake it. I am happy to report it worked out great!

So Beth, there you have it!! I didn’t get a picture, but next time I make it I will and send it to you. BTW If you want the recipe with all the parts on one page, email me and I will sent it to you as a PDF.