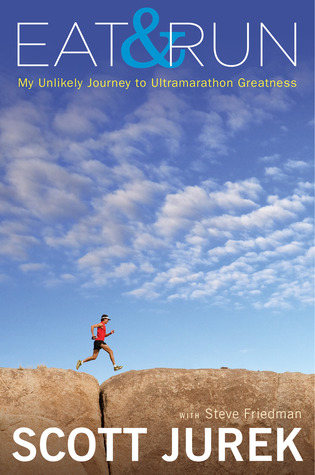 What makes Scott run? This was my overwhelming question when I picked up “Eat and Run.”

Admittedly, I have great fascination with people who push their limits – Olympic athletes, Prima Ballerinas and Rodeo Riders. There is something about using your mind and body to achieve excellence that inspires awe, respect and incredulity!

I have intense curiosity about the psychological makeup of such people. I want to know what makes someone willing to suffer cramps, black toenails, chaffing, and dehydration for a sport? Are they trying to outrun their psychic pain> Are they extremely obsessive-compulsive types? Or are they  “just crazy”? Probably a little of each!

I really wonder what makes someone willing to sacrifice relationships and “normality in pursuit of a goal? What allows someone to focus on training and winning as if they are the only things that matter?

Scott hints at some of the answers. He cites his sickly childhood, his tough relationship with his father, his mother’s Multiple Sclerosis, his health problems and the demise of his marriage. Along the way he gives the reader an insider’s view of the sport: the bureaucracy, the egos and the single-minded commitment of those who participate. How and why he became vegan is a story worth knowing.

I was spell-bound; read it (pretty much) in one big gulp. If I as a non-runner was that engrossed in the book, I am sure a runner would love it! Actually, any runner. Scott makes it clear that he has great respect for 5K runners, marathoners as well as his fellow  ultramarathoners.

I have two minor criticism of the book:

That said, however, I give this book an over all “thumbs up.”

Here is the publisher’s synopsis:

For nearly two decades, Scott Jurek has been a dominant force—and darling—in the grueling and growing sport of ultrarunning. In 1999, as a complete unknown, he took the lead of the Western States Endurance Run, a 100-mile traverse over the old Gold Rush trails of the California Sierra Nevada. He won that race seven years in a row, setting a course record along the way. Twice he won the Badwater Ultramarathon, a 135-mile “jaunt” through Death Valley. Recently he set an American record of 165.7 miles in 24 hours—6 1/2 marathons in one day. And he was one of the elite runners who traveled to Mexico to run with the Tarahumara Indians, as profiled in the bestseller Born to Run. His accomplishments are nothing short of extraordinary, but that he has achieved all of this on a plant-based diet makes his story all the more so.