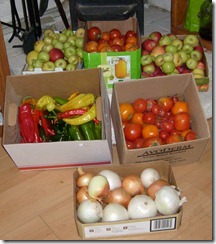 An hour later we stood in front of the boxes again. This time there was no putting it off. David began cleaning the tomatoes. I put on gloves and began deseeding peppers. END_OF_DOCUMENT_TOKEN_TO_BE_REPLACED