Like most American kids, I grew up using Morton’s salt. My mother, a nurse in her former life, stressed that the reason we used it was to be sure we got our iodine. To further imprint the lesson we were shown gross pictures of people with goiters due to lack of iodine in science classes. 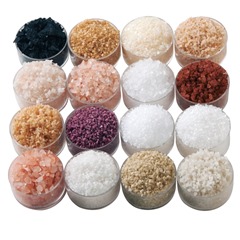 Then I grew up and discovered the amazing tastes of sea salt. I started experimenting with it in cooking, on salads, on various foods and snacks. I loved it. The variety in tastes made me very happy!  Gradually the Morton’s salt disappeared from our house.

I’m not sure how it happened, but all the information and warnings about Iodine just vanished from my brain. I’m sure if I had seen a goiter developing I would have instantly remembered. Short of that, I just continued enjoying sea salt and ignoring iodized salt.

Last year I started noticing that I was chronically tired and even began fighting depression. I complained to my doctor and she immediately ordered a test of my thyroid. The results showed that my T3 and T4 were “slightly low.” The Doc prescribed thyroid medication.  After six month I concluded that the medication made no real difference. Next we tried B12 injections. They helped but not a whole lot.

David had the same experiences and had reached the conclusion that the problem was not thyroid or B12 deficiencies. During the summer he started to complain about how he became fatigued so suddenly. Along with the fatigue he experienced the feeling that his “limbs were heavy.”

We blamed it on summer torpor; the humidity and all. When Fall came and he was no better we started worrying that we had contracted an insect born disease or some sort of virus that led to symptoms like chronic fatigue syndrome (even though we didn’t  have any of the other symptoms).

Then I cut my leg; it was a very deep cut. To keep it clean and keep it infection free I painted tincture of iodine over the area a couple of times a day. As the leg healed, I began to feel more energetic and happier. Something began to niggle at the base of my brain. . .iodine made my energy better. Very interesting!

Realizing that we had not had any iodized salt for months, I started reading up on iodine deficiency. Turns out David and I were suffering from a mild case of iodine deficiency. Which gave us a couple of choices – start using iodize salt or to continue using sea salts and paint a little iodine on our bodies once a week.

We opted for the iodine painting. A small amount at the bottom of the breast bone about once a week. The results were amazing! Our energy returned, the depression lifted and we both are  feeling better than ever. Such a simple thing, such a big difference!

That is my cautionary tale. If you have switch to sea salt or Himalayan pink salt and are not using any iodize salt, there may be consequences. If you are feeling tired and a little out of sorts, try iodine. It’s non-invasive, natural and cheap!

Genene Coté -- Nutrition Advocate, Counselor and Coach who is also a Whole Food Plant Based Eater (vegetarian/vegan), cook and gardener.
View all posts by Genene Cote →
by Genene Cote Posted on June 23, 2015
This entry was posted in B12, kitchen basics, Uncategorized, Whole Food Plant-Based nutrition. Bookmark the permalink.